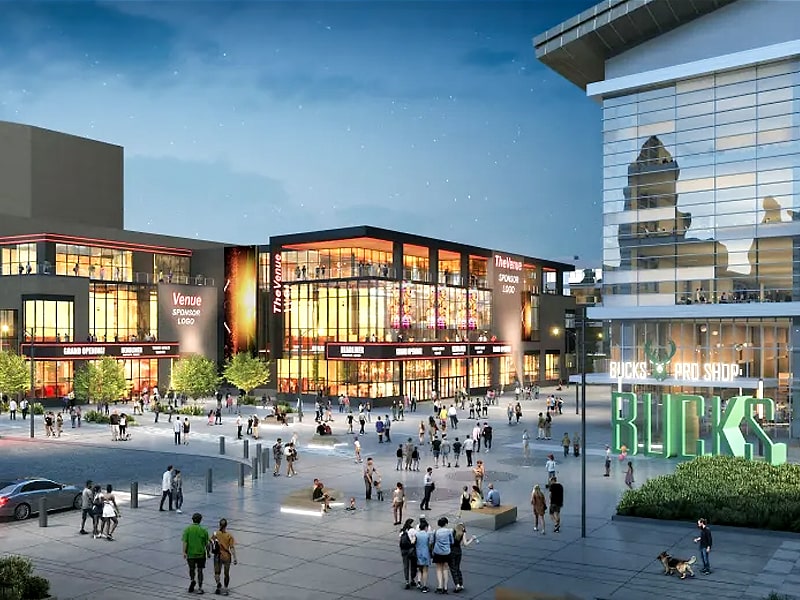 The Deer District in Milwaukee (US) could soon have a dedicated concert venue.

The ‘Urban Milwaukee’ stated that the National Basketball Association (NBA) team Milwaukee Bucks and Frank Productions, a subsidiary of national concert promoter Live Nation, jointly announced on May 23rd a proposal to develop a two-venue concert complex on a portion of the former Bradley Center site.

The Milwaukee Bucks are an American professional basketball team based in Milwaukee, Wisconsin (US). The Bucks compete in the National Basketball Association (NBA) as a member of the league’s Eastern Conference Central Division. The team was founded in 1968 as an expansion team, and play at the Fiserv Forum.

The 17,385-capacity Fiserv Forum is a multipurpose arena located in downtown Milwaukee, Wisconsin (US). It is the home of the Milwaukee Bucks of the National Basketball Association (NBA).

Developed on 30 acres of land that formerly was home to the Park East Freeway, the Deer District is more than Milwaukee’s premier location for sports and entertainment, it is Milwaukee’s newest neighborhood – a neighborhood built for Milwaukee to live, work and play.

Featuring Fiserv Forum at the center, the Deer District strives to be a 365-day destination, serving as a hub for Milwaukee’s vibrant future and connecting the existing downtown neighborhoods. From 150+ events a year, myriad dining and entertainment options and best-in-class commercial and real estate opportunities, Deer District redefines downtown Milwaukee.

The ‘Urban Milwaukee’ further stated that the new complex would include two venues targeted at live music acts with 800 and 4,000 person capacities. It would target different shows than the Bucks’ adjacent Fiserv Forum arena, which has an approximately 17,500-person capacity.

The proposal replaces Frank Productions’ plans to develop an indoor concert complex in the Historic Third Ward adjacent to Henry Maier Festival Park in Milwaukee. The new project’s estimated price is $50 million with its completion expected in 2023.

Meanwhile, a plan for a new concert venue seating 3,500 people was announced recently for a site just a half-mile away by a team led by the Pabst Theater Group. But Frank Productions’ subsidiary FPC Live isn’t projecting any doubt about its plan.

Put in FPC Co-President Charlie Goldstone, “Our company has been public about our plans for these venues since last December and privately we’ve been working on it for several years. So, we’re very confident in our project and excited about, and secondly, moving forward.”

The FPC said it was not asking for City financing assistance and that the development would be fully taxable. The Bucks and the FPC are pursuing the development as a joint venture, informed Frank Productions CEO Joel Plant.

Added Plant, “We will be opening a permanent office in just the next few weeks.”

He noted the company is already booking concerts in the City, including at Fiserv Forum and the Summerfest grounds.

The development will be subject to the labor agreement between the Bucks and Milwaukee Area Service and Hospitality Workers Organization. Representatives of both sides said the details on the agreement need to be worked out.

Goldstone, Plant and Feigin said the new venues would give the Deer District capacity to book shows of all sizes.

Observed Goldstone, “Nearly every City in the Midwest and around the country is investing in new entertainment facilities. Milwaukee should be no different.”

Feigin said the general admission venue setup would make it “different than anything that currently exists in the market”.

Plant said the amenities would help set the FPC venues apart. VIP seating would be included as well as elevated reserved seating.

The new venue is being designed by Eppstein Uhen Architects.

The team had previously announced it was considering developing a hotel on a part of the site. It issued a request for proposals in 2019 for land the team controls around the arena, before announcing the development of the Trade hotel in 2020. The North Central Group (NCG) is developing the nine-story hotel as a 205-room Marriott Autograph Collection property on a site immediately North of the arena. The NCG is leasing the land, 420 W. Juneau Avenue, from the team’s real estate affiliate.

Live Nation, which acquired a majority of FPC- parent Frank Productions in 2018, is the country’s largest concert promoter. FPC owns or operates venues in Madison, Charleston, South Carolina, and Columbia, Missouri. Its Madison venues include the 2,500-capacity The Sylvee (live music venue), the 1,700-capacity Orpheum Theater, the 600-capacity Majestic Theatre, and the live music venue High Noon Saloon in Madison, Wisconsin. Its plans for concert venues in Milwaukee would put it in competition with the Pabst Theater Group and The Rave.

The final portion of the Bradley Center was demolished in May 2019. The Bucks were required to pay to demolish the formerly State-owned structure as part of the arena financing deal. The stadium, which was considered obsolete as NBA arenas added more amenities, opened in 1988.

The Bucks previously selected the Royal Capital Group to develop Five Fifty Ultra Lofts apartment building along N. 6th St. on the West side of the arena parking garage. That building opened earlier this year and the hotel, a block to the East, will share the parking garage with the apartment building and arena. Through its real estate affiliate, the team also developed three entertainment-centric buildings on the east side of Fiserv Forum and attracted a number of tenants including Good City Brewing, Punch Bowl Social, Drink Wisconsinbly, and a yet-to-open Fat Tuesday daiquiri bar.

The Common Council approval will be necessary to advance the project. Council President Jose G. Perez was in attendance on May 23rd and said he supports both the FPC and PTG venues moving forward.