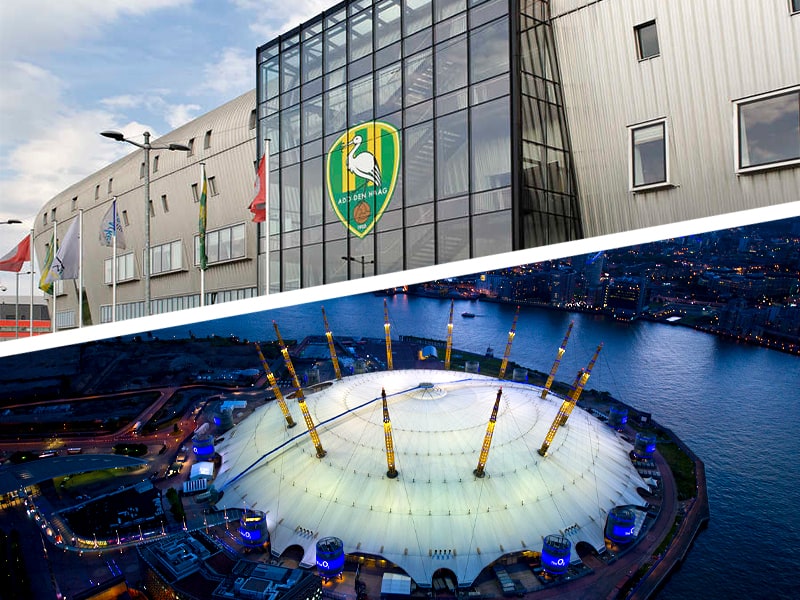 The popular arena in London’s Greenwich (UK) – The O2 Arena – which was hard-hit by the fierce winds, which hit a record 122mph on February 18th, with large sections of the canvas roof being torn away, will reopen on February 27th with a scheduled gig by the English reggae and pop band UB40, followed by a Matchroom Boxing event.

The ‘EN’ stated that the AEG-owned and operated venue will remain closed until February 25th night while it undergoes repairs to its roof damaged by Storm Eunice.

The 20,000-capacity O2 Arena is a multipurpose indoor arena in the center of The O2 entertainment complex on the Greenwich Peninsula in Southeast London (UK). It opened in its present form in 2007. It has the second-highest seating capacity of any indoor venue in the United Kingdom, behind the 21,000-capacity Manchester Arena, and in 2008 was the world’s busiest music arena.

The ‘EN’ further stated that shows by British rapper Dave, which was due to take place on February 21st and 22nd, have been postponed.

In a statement, the venue told people with tickets to an upcoming show to be “rest assured that we are working hard to make our venue event-ready and we’re almost there.”

The statement added, “The O2 prides itself on being a venue full of entertainment but following Friday’s (February 18th storm), we’re not quite looking our best. We want to continue to provide a safe and secure best-in-class experience for our visitors, so we have made the decision to remain closed until February 25th, to give us time to carry out some necessary works on our roof.”

Earlier, the ‘Mail Online’ had stated that The O2 Arena could be closed “for months” as music fans face uncertainty over upcoming performances at the venue after Storm Eunice ripped The Dome’s roof apart.

At least six sections of the roof, which measures 1200ft (365m) in diameter, have been shredded.

The ‘Mail Online’ further stated that around 1,000 people were evacuated from the venue on February 18th as firefighters rushed to the scene to make sure “no one was injured by any further falling debris”.

After The O2 closed due to the damage, an employee had earlier stated that they had been warned the venue could be closed “for a few months” while repairs are underway.

Another member of staff said that they understood that at least part of the building would be shut for the coming weeks.

Describing the damage to the roof, one employee exclaimed, “We were inside and the wind just ripped off the roof, it was whipped off – it sounded like a huge whooshing sound and then suddenly everything was exposed.”

It is not yet known how much the roof repairs will cost, but the polytetrafluoroethylene (PTFE)-coated glass fiber used to construct the domed roof in the year 2000 originally cost £14million.

Ministers at the time argued that the glass fiber would last longer, with a 25-year lifespan guaranteed – but this has been undermined by the fierce winds ripping through the structure on February 18th.

Speaking about the roof damage, an O2 spokesman said, “There has been some damage caused to the tent fabric in our roof at The O2. The affected areas have been cleared.”

After Storm Eunice hit London on February 18th, large parts of the white covering on The O2 in London’s Greenwich could be seen flapping in the strong winds. It is thought that at least six of the panels have been ripped off.

Witness Mala Sharma said, “More and more parts are getting ripped off. It’s going to be a safety issue for people around. It happened right in front of my eyes and the damage started off with a patch but then a chunk of the roof on the building, formerly known as the Millennium Dome, ripped off.”

London Fire Brigade Station Commander Chris Kamara stated, “Firefighters cordoned off the area to ensure no one was injured by any further falling debris. There has been no actual collapse or structural damage to the building, but due to the nature of the canvas material which covers The O2, it has come loose in high winds and looks quite dramatic. Crews have made the scene safe and The O2 is now closed.”

Commonly referred to as just The Dome, the originally named Millennium Dome was built to mark a new era as the year 2000 brought in the 21st century.

The £43-million structure, reminiscent of a large white marquee, was designed by British architect Richard Rogers, who passed away in December 2021.

It debuted with an exhibition marking the third millennium, which was open to the public from January 1st to December 31st 2000, but failed to garner more than just over half its 12 million forecasted visitors, widely deemed a ‘white elephant’ by the Press.

Despite its name, some have gone as far as calling The Dome a ‘tent’, due to the fact that the ‘Dome’ is held up by a network of poles and cables.

According to architects Roger Stirk Harbour + Partners’ site, “The Dome itself is suspended from a series of 12 100-meter (330-feet) tall steel masts, held in place by more than 70 kilometers (43 miles) of high-strength steel cable that, in turn, support the Teflon-coated glass fiber roof.”

Positioned a short distance away from the Greenwich Meridian Line, time was a big theme intended to be presented in the project.

Engineering consultancy Burro Happold wrote, “The 12 support towers represent the 12 hours, 12 months and 12 constellations of the sky. The Dome is 52 meters at its highest point, representing the 52 weeks of the year. Each span is 365 meters apart, symbolic of the numbers of days in a standard year. There are 24 scalloped edges at the base of the canopy, for each hour of the day. Time and space were literally of the essence to the Millennium Dome Project.”

It was delivered under-budget at £43 million, and completed within 15 months.

Politically, it’s sometimes used to refer to the over-optimisms of Tony Blair’s New Labour Government, as the former Prime Minister expanded the budget and scope of the project once construction for it began in 1997.

In 2001, Liam Allen wrote for the BBC, “Intended as a symbol of a new, brighter Britain, The Dome has been empty since the beginning of the year. But if ministers hoped media attention would disappear with the last visitor, they have had a rude awakening.”

But it had its place in British culture at the turn of the century, infamously appearing in a 1999 James Bond sequence which saw Pierce Brosnan rolling down The Dome’s roof in ‘The World Is Not Enough’.

It also features in the opening sequence of popular soap ‘EastEnders’.

It now covers the infamous O2 Arena, known as one of the most famous performance hubs around the globe.

In 2018, it was voted the world’s busiest concert venue, having sold more than 2million tickets to various events.

The future of The Dome remains unclear, as does the amount it will cost to repair the structure.

The ‘NL Times’ stated that sections of the roof of the ADO Den Haag football stadium in the Hague, Netherlands, were knocked down and blown away by Storm Eunice on the afternoon of February 18th.

The storm struck the Netherlands earlier in the day. Witnesses stated that dozens of meters of roof sections flew over the road. A fire brigade spokesperson said that solar panels were also blown off the stadium.

The 15,000-capacity Cars Jeans Stadion (ADO Den Haag Stadium) is a multiuse stadium in The Hague, Netherlands, designed by Zwarts & Jansma Architects. Completed in 2007, the stadium is used mostly for football and field hockey. It is also the home stadium of the Dutch association football club ADO Den Haag.

The ‘NL Times’ further stated that the portion of the roof was part of the Lex Schoenmaker Familietribune, a portion of the stands at the Cars Jeans Stadion named for the hometown football player. The stadium was evacuated and the fire brigade closed the street, but firefighters could do little but stand and watch as the storm wreaked havoc at the stadium. The winds were initially too strong for firefighters to approach the area.

Gusts of wind peaked at 129 km/h inland from The Hague, and 141 km/h near the City’s coastal area. The City is part of the Zuid-Holland province, one of five for which a Code Red weather alert was in place.

A recent inspection of the stadium determined it was structurally sound, and capable of withstanding heavy winds. The fire service said the storm had done a great deal of damage to the stadium.