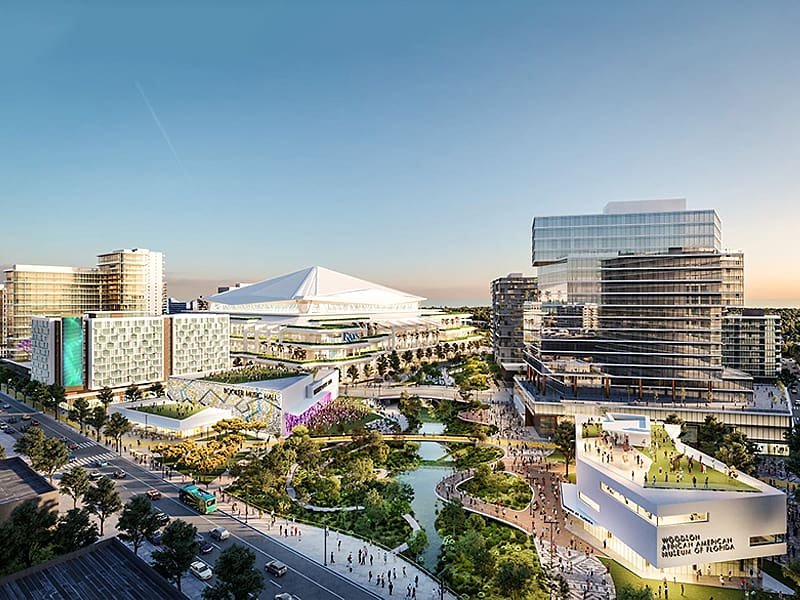 The City of St. Petersburg in Florida, US, received four proposals recently to redevelop the Tropicana Field site, including one from the Major League Baseball (MLB) team Tampa Bay Rays featuring a new downtown ballpark in a mixed-use district. The Rays are said to be planning a “pavilion-like stadium”.

‘MLB’ stated that the Rays partnered with Hines, a global real estate investment, development and property manager, to present the seven-million square foot redevelopment plan for the Historic Gas Plant District. In August, the City put out a new request for proposals (RFP) to develop the area that’s currently home to Tropicana Field, the Rays’ ballpark.

The Tampa Bay Rays are an American professional baseball team based in St. Petersburg, Florida, US. The Rays compete in Major League Baseball (MLB) as a member club of the American League (AL) East division. Since its inception, the team’s home venue has been the Tropicana Field.

The 42,735-capacity Tropicana Field is a multipurpose domed stadium located in St. Petersburg, Florida, United States. The stadium has been the home of the Tampa Bay Rays of Major League Baseball (MLB) since the team’s inaugural season in 1998.

‘MLB’ further stated that a news release from Hines and the Rays noted that their plan for the 86-acre area features more than 5,700 multifamily housing units, 1.4 million square feet of office space, 300,000 square feet of retail space, 700 hotel rooms, 600 senior living residences, a 2,500-person entertainment venue, and various civic uses along with a new “state-of-the-art” ballpark for the Rays.

Tampa Bay Rays President Matt Silverman said in a statement, “For decades, Hines has demonstrated the knowledge, expertise and reliability to deliver complex projects of this size and magnitude. Hines has been acquainted with this site for 15 years, and we know that Hines will be here 15 years from now, fulfilling its promises and vision for the Historic Gas Plant District. St. Petersburg deserves a world-class development partner with a track record of steering projects through the inevitable economic cycles we will face. With Hines leading this effort, we gain greater certainty of quality and timely completion. Together we can create a vibrant, equitable neighborhood that will be a wonderful home for Rays’ baseball for generations to come.”

Along with the Rays/Hines proposal, the City received three others from 50 Plus 1 Sports, Restoration Associates and Sugar Hill Community Partners, which was a finalist under a previous request for proposals from former St. Petersburg Mayor Rick Kriseman.

The Rays and Hines provided renderings from the global architecture, design and planning firm Gensler, and the City will post all four proposals on its website after reviewing each one. The selection process will also include a community presentation on January 4th, when each group can provide an overview of their plans to the public.

The Mayor of St. Petersburg Ken Welch will announce a decision near the end of January, and the City’s proposed timeline would have a development agreement presented to the City Council next September or October.

Welch said in a statement, “We will review the proposers’ plans with a keen eye on their interpretation of affordable and workforce housing, office and meeting space, arts and culture, research, innovation, and education, recreation, open space, healthy and sustainable development, and intentional equity. We look forward to engaging the community as we determine the future of this historically and economically vital part of St. Petersburg, and the Tampa Bay Region.”

The Rays have sought to secure a new ballpark in the Tampa Bay area for 15 years. They abandoned plans in 2009 for a ballpark at the 7,500-capacity Al Lang Stadium site in St. Petersburg, and they were unable to reach a deal with the Hillsborough County in 2018 on a proposal for a stadium in Ybor City (neighborhood in Tampa, Florida). In January, MLB rejected the club’s split-season ‘Sister City’ proposal.

The Rays’ use agreement at Tropicana Field expires after the 2027 season. If their proposal becomes a reality, the Rays’ long-running stadium saga could finally come to an end by keeping them right where they’ve always been.

The City’s RFP requested additional emphasis on equitable redevelopment, a 17.3 acre carve-out for a ballpark and specific requirements for affordable and workforce housing and adjustments in response to current economic and societal conditions and community sentiment.

Hines and the Rays said they “Have embraced and incorporated the City of St. Petersburg’s goals of honoring the Historic Gas Plant District legacy and creating St. Petersburg’s next great place to live, work and play.”

Michael Harrison, Senior Managing Director at Hines, said in a statement, “Together with the Rays, we have the opportunity to create a City-defining, diversified and inclusive placemaking village, with their new ballpark at its heart. We have coordinated extensively with the Rays on the vision and master-planned design and infrastructure necessary for the stadium, which is essential to the long-term vitality and economic viability of the entire project. We look forward to bringing our extensive experience and lessons learned from Hines’ similar projects around the globe, as well as our track record of seamless integration with the surrounding community and neighborhoods, to St Petersburg.”

‘Tampa Bay Times’ stated that if the Rays’ bid is chosen by the City of St. Petersburg and they proceed as planned, expect a stadium in 2028 that will have a fixed roof but large glass side windows that open, a capacity of around 30,000 and a turf field. It likely would cost in excess of $1 billion and be built slightly East of the current site.

The stadium is being designed, Principal Owner Stuart Sternberg informed, as “a pavilion”. It would include a somewhat square base and a roof that – while high over the playing field but with no catwalks – would (given there is no upper seating deck) appear low in scale to the rest of the shops and restaurants on what they’re calling a Game Day Street area, and fit into the neighborhood.

Said Rays Chief Development Officer Melanie Lenz, “It’s a fixed roof with operable walls. So, we’re able to open the walls up and invite the community in but have a fixed roof to guarantee comfort and gain certainty (against rain being an issue).”

‘Tampa Bay Times’ further stated that the home plate would be at the South end of the plot with batters facing North. The North and West sides would have most of the windows, which could be opened on the few days when air conditioning isn’t necessary and provide breezes.

The roof would be made out of a hard deck with sections of the fluorine-based plastic ethylene tetraflurorethylene (ETFE) which can let in diffused light.

The Rays, working with the well-known Populous architectural firm, said they have not yet designed the interior of the stadium which, according to the request for proposal, is supposed to be a state-of-the-art, community-centric, engaging ballpark. As part of that, team officials said the stadium would be available for use for myriad other events, and walkways would be open on non-event days.