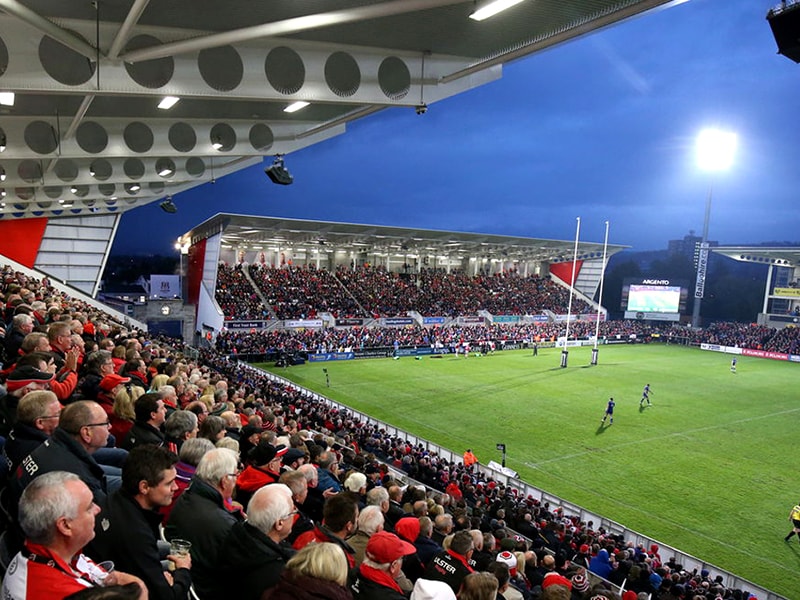 Following a six-figure investment by Ulster Rugby – one of the four professional provincial rugby teams from the island of Ireland – fans will now enjoy a range of futuristic facilities at Kingspan Stadium.

Kingspan Stadium is the home ground of Ulster Rugby and sits at Belfast in Northern Ireland.

The improvization include new digital turnstile scanners, LED floodlights, two High Definition (HD) big screens, the latest audio-visual technology in the A&L Goodbody Premium Lounge, along with queuing system which has been streamlined, and an increased number of contactless terminals for the many on-site bars. The upgrades have been so done to provide an elated experience to supporters on match day in the 18,000-capacity sports venue.

Ulster Rugby Chief Executive, Jonny Petrie, commented on the investment, “We have made a significant investment in improving the match day experience at Kingspan Stadium because we want to make it the place to be in Belfast on match nights.”

“Kingspan Stadium is widely regarded as one of the finest rugby stadia in Europe, with our plans for ongoing investment in the months and years ahead demonstrating our commitment to providing a great experience, whether it’s your first time visiting or you’re a seasoned supporter,” Jonny further stated.

On reaching the arena, visitors will be greeted by new ticket scanners at the turnstiles, which have been set up by Ulster Rugby in association with Ticketmaster (the American ticket sales and distribution company). The Kingspan Stadium will boast digital ticketing technology prowess which will lead to the machines improving ease of use and tighten stadium security.

The investment in four new LED floodlights will be an added attraction for spectators and various media and broadcast partners. The floodlights will be installed with the help of US firm Musco Lighting and Cork (in Ireland)-based Sherry Electrical Limited. With an increase in light intensity of almost 50 per cent to 1200 lux, the new lights will facilitate less energy use and increase efficiency.

With the introduction of two new ScannerVision ‘big screens’, each 8.6m x 5m screen, the technological effectiveness of the stadium has further got boosted. It is used to display game day information, club and partner content, live game footage and score updates – the equivalent in size to 90 household 42” TV screens.

Those who visit A&L Goodbody Premium Lounge, both for matches as well as for in-stadium conferences and events, will benefit from a new integrated, avant-garde audio-visual system set up by Ballymena (UK)-based Absolute Technologies.

To further shore up the upgrades, venue partner Mount Charles has initiated floor graphics, along with an increased number of contactless terminals for payment, within the many on-site bars to improve efficient customer queuing – which has already reduced waiting times on match nights by an average of 40 percent.

With Ulster Rugby competing in the Guinness PRO14 and the Heineken Champions Cup, the upgrades introduced to give fans an enriching experience on game days will surely be a welcome addition.

The Guinness PRO14 is an annual rugby union competition involving professional sides from Ireland, Italy, Scotland, South Africa and Wales and the finals will take place on June 20 this year. The Heineken Champions Cup is an annual rugby union tournament organized by the European Professional Club Rugby (EPCR). The 2019-20 European Rugby Champions Cup began on November 15 last year. The final will be staged on May 23, 2020.