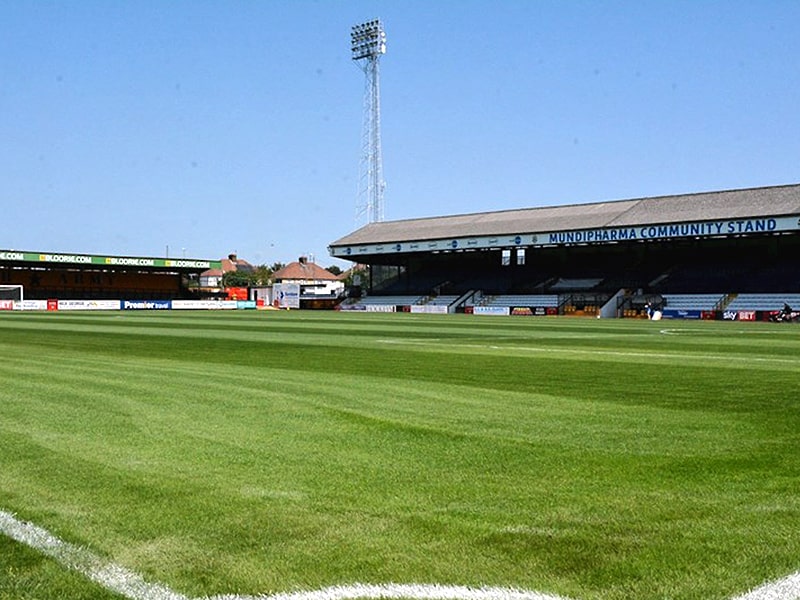 The League One team Cambridge United F.C. has announced that a deal has been agreed in principle to purchase the freehold to their home pitch – Abbey Stadium in Cambridge, England (UK) – back from Grosvenor Property UK.

The ‘Cambridge Independent’ stated that the Abbey Stadium was sold to John Howard’s Bideawhile 445 Ltd Company in December 2004 because of financial difficulties at the club at the time, and in March 2010, it was sold on to Grosvenor Estates, with the club granted a long-term lease to keep the ground as their home.

The Cambridge United Football Club is a professional association football club based in the City of Cambridge, England (UK). In the 2021-2022 seasons, the club competes in League One, the third tier of the English football league system, following promotion from League Two.

The Abbey Stadium is a football stadium in Cambridge, England (UK). It has been the home ground of Cambridge United F.C. since 1932, and currently has a maximum capacity of 8,127 spectators.

However, majority owner Paul Barry has revealed to fans in an open letter that ‘The U’s’ will now be buying back the freehold of the site.

Said Barry in a statement to fans, “I am pleased to be able to tell you all that today (March 8th, 2022) we have agreement in principle with Grosvenor for the club to buy back the freehold of the Abbey Stadium. We have agreed to a very fair and reasonable price. The funding plan is in place and we hope to conclude the purchase by Summer. We all owe Grosvenor a great debt and they will always be a valued part of this football club.”

Added Barry, “Like many of you, I remember well the hurt and pain of the Abbey sale and whilst I speak for everyone at the club now – from owners down – that we would never countenance a repeat, which is self-evidently not enough. None of us can predict the future so guarantees need to be in place to ensure that this can never happen again, that the Abbey Stadium can remain the home of Cambridge United and that the club can only move from it with consent if there is an alternative genuinely considered to be in the best interests of the club.”

The ‘Cambridge Independent’ further stated that in order to protect the club going forward, Barry has also revealed that ‘The U’s’ intend to put in place a ‘Golden Share’ to provide safeguards for fans to recognize and protect football stadia as community assets.

It was a recommendation from the Fan Review conducted by Tracey Crouch MP, who will be working with ‘The U’s’ alongside the Football Supporters’ Association Chief Executive, Kevin Miles, on the initiative.

Barry further stated in his letter, “We want this to be a model for other clubs at a critical point for football. We would envisage a small number of representatives from different associated groups holding the Golden Share on behalf of the club, so the principle of consent is enshrined and the true interests of fans represented in any future discussions. In simple terms, if future owners wanted to sell the Abbey and relocate the club, those holding the Golden Share could veto the decision unless they considered it to be the right thing for the club. While Mark, Adam and I are nominally the co-owners of the club, we have always recognized we are simply its custodians and we must ensure that the Abbey can never be used as a property development pawn in the future.”

Barry has revealed that United also intend to make substantial investment at their training ground, which they lease from Clare College.

But more details will be announced shortly.

The majority owner said, “Taken together, these investments represent significant sums, but it should not encourage anyone to think that we are suddenly awash with money or that the club is suddenly in a very different financial position. We are not. Rather, as custodians of Cambridge United we have decided to invest strategically in its infrastructure for the long term and to take advantage of this window of opportunity to repurchase our ground. It will continue to be the ambition of owners and the Board to run the club sustainably in the future with a prudent but competitive playing budget.”

James Cochrane of Grosvenor commented, “We’re delighted to be returning the stadium back to a resurgent Cambridge United. The club is in a much stronger position today than in 2010, on the field, commercially and as a major contributor to the community. Playing a role in this success has been incredibly rewarding.”

Added Cochrane, “We have a longstanding relationship with Cambridge and will continue to champion the future success of the City through Trumpington Meadows and other projects and in supporting the club on and off the pitch.”