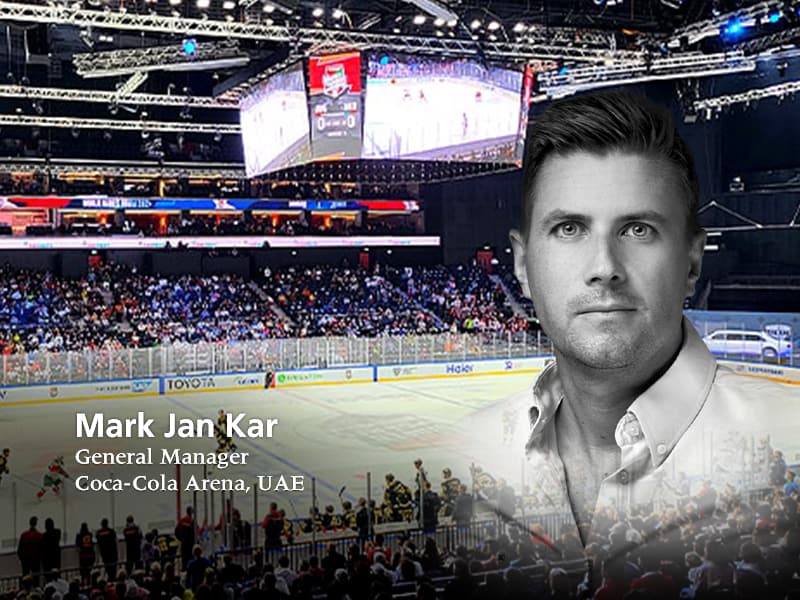 In the role of the General Manager of Coca-Cola Arena – the ravishing red arena in Dubai – Mark Jan Kar knows the ins and outs of the majestic venue. Kar who has lived in Dubai since 2008 has seen the Coca-Cola Arena grow since he took over as the Commercial Director in November 2018, and shortly after took on the role as Head of Commercial and Live in June 2021, overseeing all elements of commercial business and live shows at UAE’s first multipurpose indoor events venue -before being appointed as General Manager in 2021.

With over a decade of regional experience, Kar is passionate in establishing a true legacy for Coca-Cola Arena at its home in City Walk Dubai and effectively ingraining the venue into the community as a market leader in providing unrivaled live experiences. He brings with him a wealth of experience in the sports and events industries.

Coca-Cola Arena is a multipurpose arena located at the City Walk in Dubai in the United Arab Emirates (UAE). The venue opened on June 6th, 2019. It has a capacity of 17,000.

The Coca-Cola Arena is Dubai’s home of live entertainment and is a facility where dreams are woven.

Mark Jan Kar, the top shot official of Coca-Cola Area, tells ‘Coliseum’ in an exclusive chat that the facility caters to the needs of diverse communities living in Dubai – people belonging to 200 nationalities reside here – and dispelled the wrong concept that people hold – that the “venue is all about Western shows” and asserted that Western shows comprise only 25 percent of the arena’s content and its unique quality lies in its diverse character.

He informed, “The Coca-Cola Arena is located in City Walk and is a precinct by Dubai Holdings who are the owners of this building as well and the site area is 106,000 square meters and we have a capacity of 17,000. The Coca-Cola Arena is managed by ASM Global, the world’s leading venue management and services company. When we talk about capacities, it is quite important to note that it is all about the standing floor area and if you are looking at the fully seated show approximately about 14,000 to 14,500. We have retractable seatings throughout, 190 metric tonne roof load, over 84 in-house speakers, 42 hospitality lounges ranging in sizes from 20 to 45 in capacity, two row suites, two premier club lounges, and two VIP lounges. And ultimately, we do not have an anchor tenant but our core concentration in terms of content is music, family and sports.”

The Coca-Cola Arena plays host to:

The Arena enjoying 190 metric tonne roof load translates to the fact that the roof structure can support 190 metric tonnes of production equipment meaning the biggest and best shows in the world can be easily accommodated in the scintillating venue.

Kar continued, “We opened in June 2019 and our first ever event was the Russell Peters (Canadian stand up comedian) show on June 6th followed by the soldout show by the American pop band Maroon 5 on June 14th with some phenomenal content.”

In March 2020, the world got a punch on its face in the form of the fatal respiratory disease COVID-19 which has taken a huge toll on human lives and continues to cause ravages in some parts of the world in the form of its virulent variants.

The Coca-Cola Arena stopped in its track in March 2020 and “We continued with some of our activities in October-November-December 2020 and then restrictions came through for Dubai and we ceased operations at the end of January 2021 and effectively reopened in June 2021. Since June 2021, we have undertaken 44 live event days, some corporate activities and we have sprung back to life. In terms of Government regulations, at the moment we stand at 70 percent capacity, slightly below the football entertainment side but we hope that will increase reducing and allowing our ability to move to 100 percent very soon.”

He added, “We concentrate on entertainment, community, diversity, and our audience is very much entertainment seekers, family-first, sports fanatics, music lovers and the journey, the most important part of it is all about the arrival of fans, the performance and the post-event. The arrival starts the moment they receive their tickets or make the transactions of a purchase right through to arriving in a transport via vehicle, personal car or taxi or by the Metro just across the road. The live performance in itself, the timing of the event, the performance, the acoustics, not to mention the artistes, and then the post-event – the egress, availability of taxis, timing of the shows to enable guests to continue to catch the Metro and, of course, riding to the precincts in terms of our retail offerings in food and beverages (F&Bs).”

Diversity is key and ever present in Coca-Cola Arena’s mission with shows catered for all audiences – “We keep talking about diversity but in this phenomenal country that we live in, especially in Dubai with a mix of nationalities, everyone judges and talks about Western shows. But the reality is that Western shows only make about 25 percent of the content. It’s really about the diversity. So, you have got Arabic content, Asian content like Bollywood stuff (the Indian Hindi-language film industry based in Mumbai), a variety of family shows, comedy right through to classical events. When we talk about Western contents, we also talk about different nationalities or languages of contents – so from French contents to Ukrainian to obviously English and minor-major Western everything in between.”

Some of the sporting activities that have taken place in the Coca-Cola Arena – “In 2019, we had a Philippines Basketball Association tournament – three games in the building. We have undertaken boxing both in a professional capacity as well as Social Knockouts of influencer boxing that is taking place across the world. In December 2021, we had a professional ice hockey fixture with the Kontinental Hockey League (KHL) with the Russian Avangard Omsk vs. AK Bars Kazan – two professional teams of Russia, actually both playoff teams from previous years with Avangard being last year’s champions. We also had indoor cricket which had motivational speakers like Tony Robbins and corporate events.”

Kar further stressed that the focus of Coca-Cola Arena’s strategy is on having the flexibility to accommodate a range of events – “Range of events in terms of the demographics that we talked about, different timings throughout the year and working with different stakeholders such as Dubai Tourism and understanding of what are the key markets for them as well as seasonal activities.”

Although the Coca-Cola Arena is a 17,000-capacity venue, but the fact is that it is packed-like-sardines only on very rare occasions – “So, very much understanding that although this building is designed for a capacity of 17,000, but the reality is that we will probably be doing that two or three times a year. The suites part for us is very much without the Level 4 capacities so you are looking at around between four to seven thousand. It is due to this that we have come in with an investment that we have made in terms of drape line led by the production team.”

He added, “As part of the above investment, we are able to essentially overnight turn a venue from as little as 500 to 17,000 by utilizing the space correctly, understanding where the drapes can go in to give that soldout feel.”

Kar informed, “We can hang 190 metric tonnes from the roof so allowing us the ability to roll in and roll out shows overnight as well although many people disagree.”

As far as active venue façade lightings are concerned, the Coca-Cola Arena boasts 4,800 LED lights across the whole entire building which gives that phenomenal lighting structure and “For being Coca-Cola we traditionally keep it red but allowing us for special events such as National Days or in celebration of Expo where we can turn the building into different colors (changing colors depending on the action inside) and ultimately become one of the beautiful landmarks of Dubai.”

The open space layout of the drop-in-a-swoon venue accommodates different venue events – largescale concerts such as Maroon 5 and recently in December 2021 the Martin Garrix concert (Dutch DJ) and comedy events such as Jo Koy (American stand-up comic) and Kapil Sharma (Indian stand-up comedian) and then the sporting events like the Tie Break Tens Event (a tennis format in which only tie-break matches are played).

Talking about Coca-Cola Arena’s plans for having anchor sports tenants in the future, he explained, “The objective of the ASM-AEG venues where we have anchor tenants both in basketball or ice hockey and Dubai does not have a professional sports franchise team but you have got football but it is slightly different in terms of an indoor sport. The ambition is to have multiple franchise teams like we do in Berlin (Germany) or the 20,000-capacity Crypto.com Arena in Los Angeles (US) with the Los Angeles Lakers and so forth. There are discussions ongoing and these discussions started pre-COVID and we are finally being able to execute the ice hockey game, they have made investments on the ice and it now lives in the arena and so our ambition is to have professional teams across variety of sports.”

The Coca-Cola Arena embodies diversity and Mark Jan Kar is going above and beyond to ensure that the spectacular venue lives up to its diversity image. 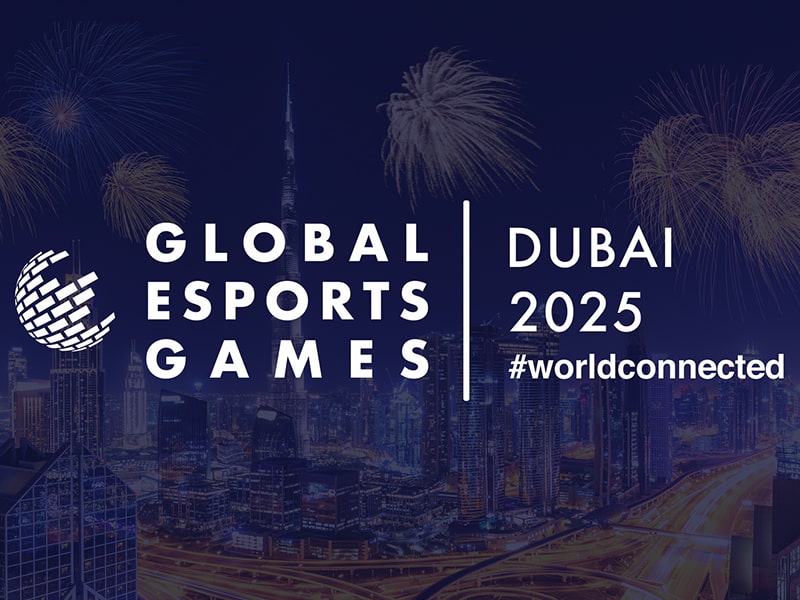 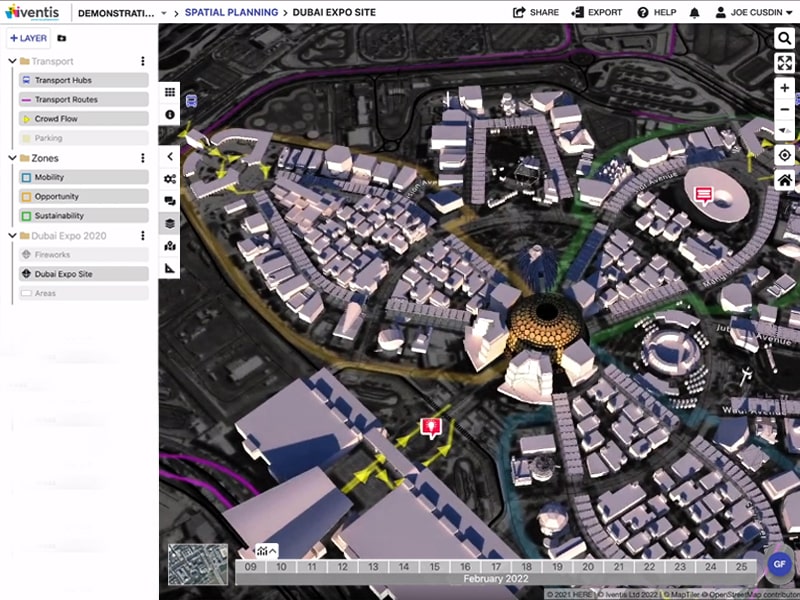 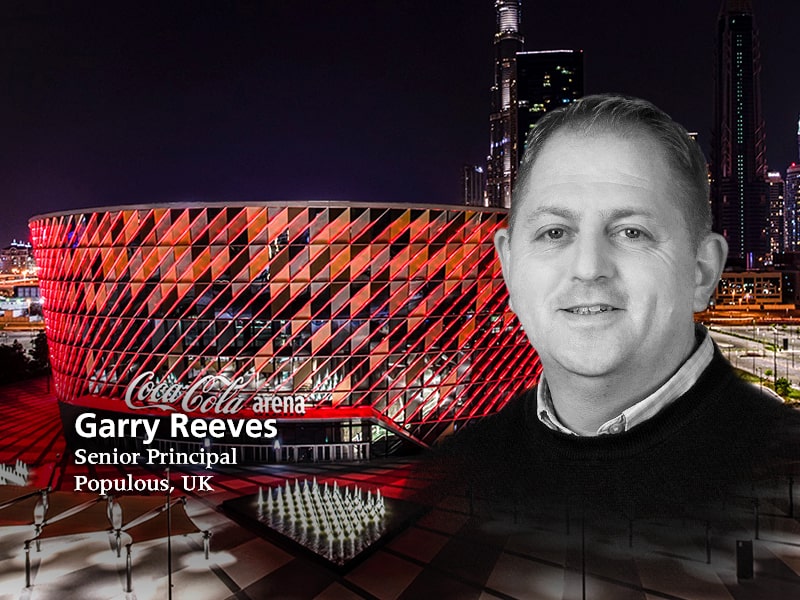