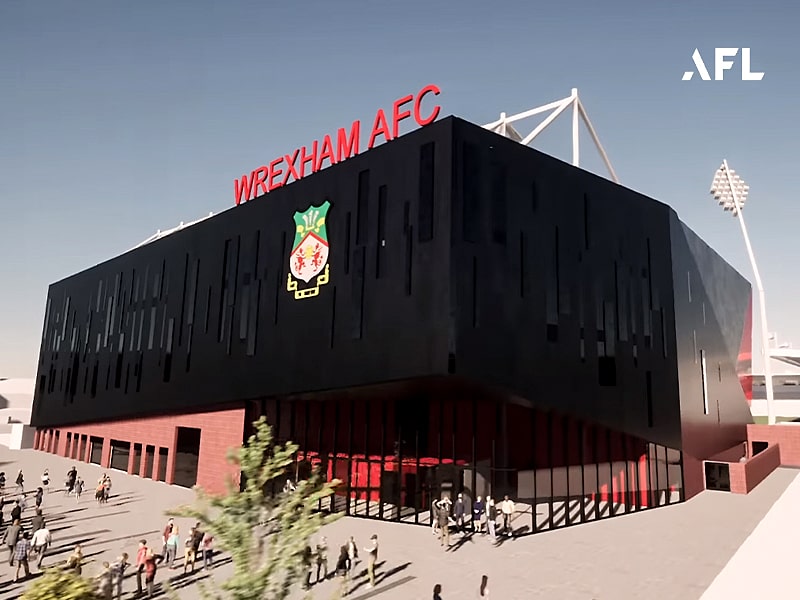 The Welsh professional association football club Wrexham A.F.C. (UK) has been given permission by the Wrexham Council to demolish the Kop and clear the site.

‘the Leader’ stated that the club submitted an application to the Wrexham County Borough Council at the start of June, outlining their plans to demolish the iconic Kop.

The Wrexham Association Football Club is a Welsh professional association football club based in Wrexham, Wales (UK). The team competes in the National League, the fifth tier of the English football league system.

‘the Leader’ further stated that they have since released images and video of the proposed plans for the new stand which have gone down well with the fans.

On what is the last day (June 24th) of the stadium for the North petition, the club announced that their application had been approved by the Council.

A club spokesperson said, “Wrexham A.F.C. has received confirmation from the Wrexham County Borough Council that demolition of the Kop and clearance of the site can be undertaken. The required works will be put out to tender in the coming weeks, so no commencement date is known at this stage.

This is a significant step towards bringing the new Kop development to fruition.

The spokesperson added, “The crush barriers have already been removed with the consent of both Wrexham Glyndwr University and the club by the Wrexham Supporters Trust, who have raised £20,205 to date from the sale of these with further barriers still available.”

‘Wrexham AFC’ stated that earlier, Wrexham A.F.C. released the first images and a computer-generated fly-through of the exciting designs for the proposed Kop development.

In presenting these images, Co-Chairmen Rob McElhenney and Ryan Reynolds commented, “Back in February 2021, when we first became custodians of the club, it was identified that reverting the Racecourse Ground to a four-sided stadium was a priority for us. The desire to achieve this objective has only been multiplied by the fact that the sold-out signs were a regular feature at the Racecourse Ground, and we want the club to be accessible to everyone, so the increased capacity is key to achieving this. We would encourage everyone to support the planning application when it is submitted and would like to thank the Wrexham Council, the Welsh Government and the Wrexham Glyndwr University (together the Gateway Partnership) who are fully committed to making the new Kop a reality.”

The new 5,500-capacity stand will include a hospitality lounge, office and retail space for the club, along with facilities for the Wrexham A.F.C. Community Trust to enhance their work further.

The ‘Wrexahm AFC’ further stated that of the capacity, 5,000 will be allocated for General Admission to meet the loyal demand of supporters and will be in the form of a seat with a rail immediately in front. This will allow the club to meet the all-seater criteria of the Union of European Football Association’s (UEFA’s) Category 4 status, while allowing supporters to stand for Wrexham fixtures. An example of the seating will be installed in the car park at the Racecourse Ground for supporters to view during the next four weeks.

The balance of 500 seats will be of a corporate style with direct access from the hospitality lounge. Accessible seating will be available at elevated positions throughout the stand, improving accessibility and providing unparalleled views for fans with restricted mobility.

The external elevations have been designed to recognize Wrexham’s link with the coal mining industry, a theme that will be continued in the public realm areas around the Kop.

The matchday concourse area will become an exhibition space for events on non-matchdays to address the current gap in the local market and generate more economic activity and profile to benefit the town (Wrexham).

A statutory consultation period of one month will commence on July 1st, 2022.

During this consultation period, the club intends to meet with as many organizations as possible that have an interest in the development including local resident organizations, local councilors, the club’s Disabled Supporters Association, Level Playing Field, and its Safety Advisory Group.

Following the statutory consultation process, the intention is to submit a planning application to the Wrexham County Borough Council for permission to deliver the new Kop Stand.

Funding for the Kop will come from both the public and private sectors, with the club making a significant contribution towards the overall cost.

The public sector funding that is being sought from the Levelling Up Fund Bid will ensure the Racecourse Ground becomes ‘The Stadium for the North’, meeting the requirements of hosting international sporting events that are far beyond what the club needs to compete in domestic competitions.

Information on supporting the independent ‘Stadium for the North’ campaign can be found here.

The Levelling Up Fund is a competitive fund, with funding distributed to places across the United Kingdom on the basis of successful project selection. The Fund will set aside at least £800 million across Scotland, Wales and Northern Ireland over four years from 2021-2022 to 2024-2025.

« Previous News: Tripleplay tech does the trick across stadia
» Next News: ‘Dynamic’-‘dashing’ look for Dynamo-Dash home