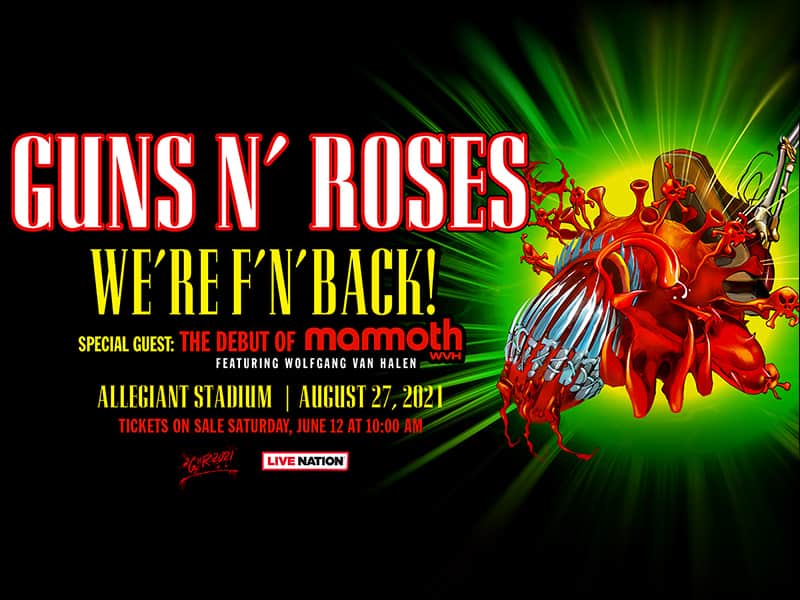 Iconic rock legends Guns N’ Roses will be the first ever rock band to bring live rock n roll to the stunning Allegiant Stadium when their US tour comes to Las Vegas on August 27th, 2021.

A press release issued in this context by Allegiant Stadium stated that ‘A Nightrain Fan Club’ presale will be held from June 9th at 10 am PT through Friday, June 11th at 10 pm PT. Tickets start at $39.50 and will go on sale to the general public on June 12th at 10 am PT at Gunsnroses.com.

Guns N’ Roses, often abbreviated as GNR, is an American hard rock band from Los Angeles, California (US), formed in 1985.

Located adjacent to the world-famous Las Vegas Strip, the Allegiant Stadium is a global events destination and the newest state-of-the-art entertainment venue in Las Vegas (US). Home of the iconic Las Vegas Raiders of the National Football League (NFL) and UNLV Football, Allegiant Stadium is ideally located for both visitors and locals. The technologically advanced stadium is fully enclosed and climate-controlled with a capacity of up to 65,000.

The release further stated that produced by Live Nation, the massive touring production will kick off on July 31st at the 15,641-capacity Hersheypark Stadium in Hershey, Pennsylvania, with stops in Detroit, Los Angeles, Dallas, Chicago, and more before wrapping up with two shows in Hollywood, Florida at the 7,000-capacity Hard Rock Live Arena on October 2nd and 3rd.

The release concluded by stating that American musician Wolfgang Van Halen’s Mammoth WVH will make their touring debut on the GNR trek, and will perform songs from their self-titled LP (due June 11th) including single ‘Distance’ which has peaked at #1 on six Billboard charts.