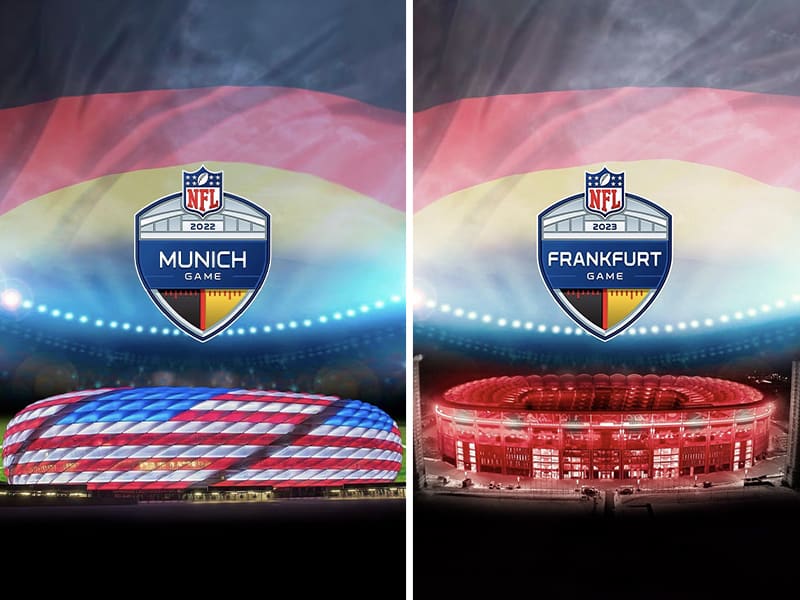 The City of Munich will host the first-ever regular-season National Football League (NFL) game in Germany in 2022, the league announced on February 9th.

‘The Athletic’ stated that four games will be played in Germany over the next four years, with two being held at Bundesliga giant FC Bayern Munich home ground – the 75,000-capacity Allianz Arena in Munich. The other two games will be hosted at the 51,500-capacity Deutsche Bank Park in Frankfurt, where Eintracht Frankfurt plays. Both Bayern Munich and Eintracht Frankfurt compete in Bundesliga, the top tier of the German soccer league system.

Exulted the NFL Commissioner, Roger Goodell, “We are very pleased to welcome Munich and Frankfurt to the NFL family and are excited to reward our fans in Germany for their passion by bringing them the spectacle of regular-season NFL football.”

Four other international regular-season games are planned for 2022. One will take place in Mexico and the other three in the United Kingdom – two at the 62,850-capacity Tottenham Hotspur Stadium in London, England, and one at the 90,000-capacity Wembley Stadium in Wembley, England. The NFL team Jacksonville Jaguars will play at the Wembley Stadium as the home team.

‘The Athletic’ further stated that dates and matchups for the 2022 international games will be announced later this year.

The ‘BILD’ stated that in addition to the two Cities, Düsseldorf had also tried to get regular main round games in the National Football League.

The league had already revealed in December that the NFL teams Kansas City Chiefs, the New England Patriots, Super Bowl champion Tampa Bay Buccaneers, and the Carolina Panthers had secured the league’s marketing rights for Germany. Behind this are the NFL plans to increase the global growth of its own brand as part of the so-called ‘International Home Marketing Area’ (IHMA).

The ‘BILD’ further stated that Munich was chosen as the location because of the marketing opportunities and the futuristic Allianz Arena. In addition, FC Bayern has maintained a close partnership with the Kansas City Chiefs for years with owner Clark Hunt (56), who also owns Bayern partner club FC Dallas (soccer).