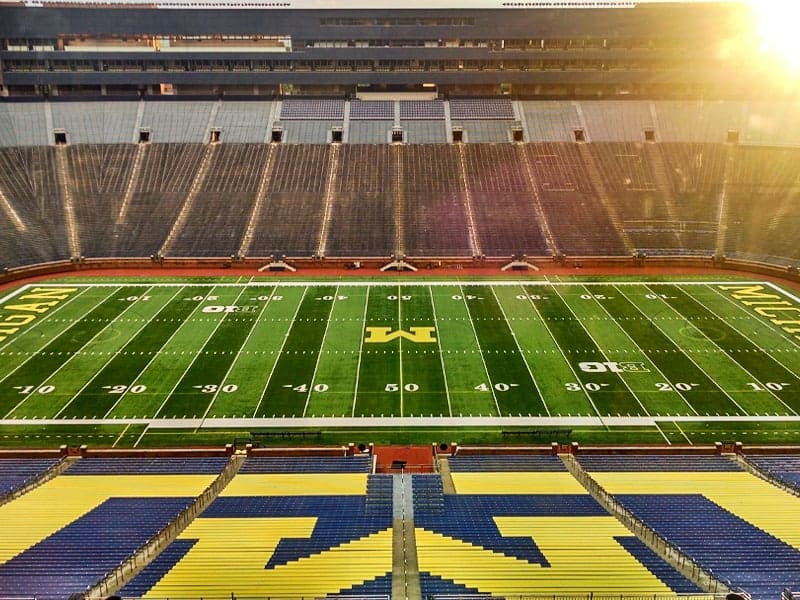 US college sports conference the Big Ten has announced it will open its American football season on October 23rd -24th, 2020, little over a month after deciding to postpone.

The Big Ten and Pac-12, two of the five wealthiest conferences, last month postponed their Fall sports seasons due to COVID-19 taking frightening form in the United States, including the highly lucrative football competitions. The ‘Power Five’ conferences, whose membership include the likes of University of Michigan, Ohio State University and the University of Southern California, took the decision despite pressure to continue.

The Big Ten suspended Fall sports, while the Pac-12 said it would not stage any sports competitions for the remainder of 2020. However, the Big Ten sung a different tune on September 16th, with all 14 teams scheduled to play eight regular-season games in eight weeks, with the conference championship game set for December 19th.

Ohio State Athletic Director Gene Smith told mediapersons, “We’re in a better place, regardless of how we got here or how painful it was during the time we waited to get this moment. That’s all behind us. What’s beautiful is that we have a process and protocols in place that’s based on Science and based on lessons learned since August 11th.”

The Big Ten said its Council of Presidents and Chancellors voted unanimously to restart sports. Last month’s vote to postpone was 11-3, with Ohio State, Iowa and Nebraska voting against. However, the huge football stadia of the Big Ten, such as the Big House in Ann Arbor, Michigan, and Beaver Stadium in State College, Pennsylvania, won’t be filled with their usual 100,000 fans.

While some attendance is expected, tickets won’t be sold to the general public for Big Ten games. “That’s still an 80,000-seat stadium that we don’t have,” said University of Wisconsin Athletic Director Barry Alvarez when referring to Camp Randall Stadium (in Wisconsin). Alvarez had earlier estimated the loss of the football season would cost the college $100m (£77.5m/€84.7m).

Even President Donald Trump intervened in the college football debate, with the Big Ten home to a number of key States in November’s Presidential elections.

“I called the Commissioner (Kevin Warren) a couple of weeks ago and we started really putting a lot of pressure on, frankly. There was no reason for it not to come back. There is no reason why the Pac-12 shouldn’t be playing now,” Trump said on Wednesday.

The 2020 Big Ten (US) football schedule will be announced on a future date. In a press conference held on September 16th, it was revealed that fans will not be allowed to grace this season at any Big Ten Stadium as United States continues to be walloped by COVID-19. Exception may be made in the case of student-athlete or staff family members. Apart from this, tailgating is a total ‘no’ on the Michigan State campus.

The Big Ten Conference is the oldest Division I collegiate athletic conference in the United States. It is based in Rosemont, Illinois. For over eight decades this conference consisted of 10 universities, and presently has 14 member and two affiliate institutions.

The Big Ten Council of Presidents and Chancellors (COP/C) adopted significant medical protocols including daily antigen testing, enhanced cardiac screening and an enhanced data-driven approach when making decisions about practice/competition. The COP/C was unanimous on the decision to resume the football season starting the weekend of October 23rd -24th, 2020. The decision was reached based on information presented by the Big Ten Return to Competition Task Force, a working group that was set up by the COP/C and Commissioner Kevin Warren to ensure a collaborative and transparent process.

The Big Ten medical protocols lay down that student-athlete, coaches, trainers and other individuals that are on the field for all practices and games will have to undergo daily antigen testing. Test results must be completed and recorded prior to the start of each practice or game. Student-athletes who test coronavirus positive through point of contact (POC) daily testing will have to undergo a polymerase chain reaction (PCR) test to confirm the result of the POC test.

“Everyone associated with Big Ten should be very proud of the groundbreaking steps that are now being taken to better protect the health and safety of the student-athletes and surrounding communities,” noted Dr Jim Borchers, Head Team Physician, The Ohio State University and Co-Chair of the Return to Competition Task Force medical subcommittee.

“The data we are going to collect from testing and the cardiac registry will provide major contributions for all 14 Big Ten institutions as they study COVID-19 and attempt to mitigate the spread of the disease among wider communities,” Borchers added.

Each institution will appoint a Chief Infection Officer (CInO) who will be responsible for the collection and reporting of data for the Big Ten Conference. Team test positivity rate and population positivity rate thresholds will be used to determine recommendations for continuing practice and competition.

Apart from the medical protocols greenlighted, the 14 Big Ten institutions will set up a cardiac registry in an effort to examine the effects on COVID-19 positive student-athletes. The registry and associated data will strive to answer many of the unknowns regarding the cardiac manifestations in COVID-19 positive elite athletes.

“From the onset of the pandemic, our highest priority has been the health and the safety of our students. The new medical protocols and standards put into place by the Big Ten Return To Competition Task Force were pivotal in the decision to move forward with sports in the conference,” asserted Morton Schapiro, Chair of the Big Ten Council of Presidents/Chancellors and Northwestern University President, and Chair of the Return to Competition Task Force Steering Committee.

“We appreciate the Conference’s dedication to developing the necessary safety procedures for our students and the communities that embrace them,” Schapiro added.

“Our focus with the Task Force over the last six weeks was to ensure the health and safety of our student-athletes. Our goal has always been to return to competition so all student-athletes can realize their dream of competing in the sports they love,” observed Big Ten Commissioner Kevin Warren.

“We are incredibly grateful for the collaborative work that our Return to Competition Task Force has accomplished to ensure the health, safety and wellness of student-athletes, coaches and administrators,” Warren added.

The Big Ten Conference will use data furnished by each CInO to make decisions about the continuation of practice and competition, as gauged by team positivity rate and population positivity rate, based on a seven-day rolling average:

Decisions to alter or halt practice and competition will be based on the following scenarios:

Eventually, all Big Ten sports will require testing protocols before they can resume fixtures. Updates regarding Fall sports other than football, as well as winter sports that begin in the Fall including men’s and women’s basketball, men’s ice hockey, men’s and women’s swimming and diving, and wrestling, will be announced shortly.

The Big Ten Conference is an association of crème de la creme varsities whose member institutions share a common mission of research, graduate, professional and undergraduate teaching and public service. Founded in 1896, the Big Ten has sustained a comprehensive set of shared practices and policies that enforce the priority of academics in the lives of students competing in intercollegiate athletics and emphasize the values of integrity, fairness and competitiveness. The broad-based programs of the 14 Big Ten institutions will provide over $200 million in direct financial support to more than 9,800 students for more than 11,000 participation opportunities on 350 teams in 42 different sports. The Big Ten sponsors 28 official conference sports, 14 for men and 14 for women, including the addition of men’s ice hockey and men’s and women’s lacrosse since 2013.

Remarked Michigan State University President Samuel L Stanley Jr., “I support this decision to allow a modified Fall football season. With all that we’ve learned in the past month about rapid response testing, and from other athletic leagues both professional and collegiate, I feel more confident that we can collectively play football while still keeping our student-athletes, coaches and staff safe. MSU will adhere to the regulations put forth by the Big Ten Conference to move forward in a safe and thoughtful manner.”

“I’m grateful that the COP/C (Council of Presidents and Chancellors) was willing to revisit their decision when presented with updated information, and I’m appreciative of the effort put in by both the medical community and my fellow Athletic Directors across the conference in gathering and presenting that information. I know Coach Mel Tucker is eager to begin his first season as Michigan State’s football coach, and I’ve been extremely impressed by the way he’s kept our guys motivated throughout the summer and Fall, even when the season was postponed. And most importantly, I must reiterate how happy I am for our student-athletes. They always work hard, but this year has been an offseason like none other, and still they’ve persevered and never lost their focus. While football games will definitely look different this Fall, I know I will still have immense pride as I watch the Spartans run through the tunnel at Spartan Stadium (in Michigan).”

Michigan State Head Football Coach Mel Tucker stated, “From daily antigen testing for all of our players, coaches and staff to extensive cardiac protocols and protection, the Big Ten Conference and Michigan State are leading the charge to put our players on the field safely and competitively.”

Tucker added, “Our players have been relentlessly training in our strength and conditioning program and we will be ready to compete. Thank you to all our Spartan fans for your support and the Big Ten Task Force and the medical leaders who got us here today. Go Green!”