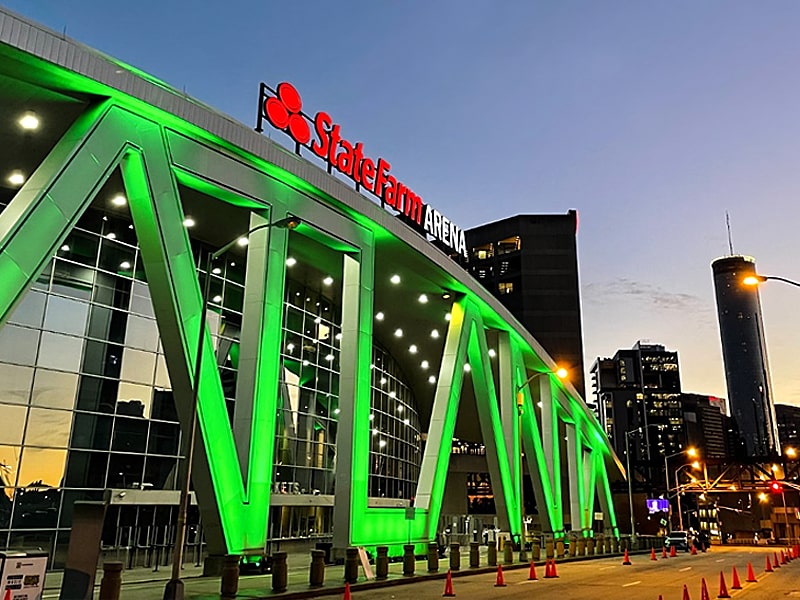 The ‘Atlanta Hawks’ stated that with this achievement, the State Farm Arena is now the only and world’s first sports and live entertainment venue in the world to receive TRUE certification. When beginning this journey in 2019, the State Farm Arena diverted only an average of 10 percent of total waste. Since May 2021, the venue has consistently diverted a minimum of 90 percent of fan-generated waste from landfills.

The Atlanta Hawks are an American professional basketball team based in Atlanta, US. The Hawks compete in the National Basketball Association (NBA) as a member of the league’s Eastern Conference Southeast Division. The team plays its home games at the State Farm Arena.

Committed to entertaining and uniting the City of Atlanta since 1968, the Atlanta Hawks and the State Farm Arena, under the leadership of Principal Owners Tony Ressler and Jami Gertz, continue to build bridges through basketball by following its True to Atlanta mantra. On the court, the Hawks’ exciting young core is led by All-Star point guard Trae Young as the organization received the NBA’s top ranking in overall in-game experience for the last two seasons. Off the court, the Hawks organization focuses on positively impacting the lives of Atlantans through providing access to youth basketball, fighting food insecurity and the recent transformation of State Farm Arena into Georgia’s largest-ever voting precinct for the 2020 elections.

The 21,000-capacity State Farm Arena is a multipurpose indoor arena located in Atlanta, Georgia (US). The arena serves as the home venue for the National Basketball Association’s Atlanta Hawks.

Enthused Brett Stefansson, Hawks’ Executive Vice-President (EVP) and the General Manager of State Farm Arena, “We are honored to receive TRUE Platinum certification from GBCI as we continue to set the standard as a global leader in the sports and entertainment industry.”

A few of the highlights that led to State Farm Arena’s TRUE Platinum certification was diverting a minimum of 90 percent of all waste from landfills and incineration during basketball games, concerts and events. The venue diverted more than 500,000 lbs. of waste during Hawks’ home games throughout the 2021-2022 NBA seasons.

Lastly, the Hawks and the venue worked closely with one of their proud sustainability partners, Novelis, the world leader in aluminum rolling and recycling, who provided guidance and operational knowledge to organize, sort and recycle aluminum and other materials.

Peter Templeton, President and CEO of U.S. Green Building Council and GBCI, pointed out, “By pursuing zero waste, the State Farm Arena and the Atlanta Hawks recognize the positive impacts of reducing the amount of waste that goes to landfills helping us build a sustainable future. Waste impacts all facets of business and changing the way that we use resources will deliver public health benefits, reduce our environmental impact and advance a Greener economy. Sports leagues and teams reach large audiences and have the power to expose everyday audiences to sustainability strategies like zero waste.”

Throughout this milestone accomplishment, the Hawks and State Farm Arena were assisted by local vendors such as CompostNow, who provides commercial composting solutions, and Haulin’ Glass Recycling, which provides glass recycling services. Venue partners such as Levy Restaurants, the official venue’s food and beverage partner, helped in the supply chain process, and Pritchard Sports & Entertainment, the venue’s official housekeeping partner, also assisted operationally with the collection and sorting of all materials.

Noted Geoffrey Stiles, Hawks’ Senior Vice- President of Facilities and Events for State Farm Arena, “Accomplishing this was only possible with an entire team effort. When we began our zero waste journey, we knew that the vision would take buy-in from everybody – our fans, partners and staff – night after night and event after event to make this happen. We are incredibly grateful to share this monumental achievement with them.”

Local organizations such as The Center for Hard to Recycle Materials (CHaRM) aided in creating various recycling solutions for the State Farm Arena.

Stated Sofi Armenakian, Director of Sustainability and Operations for the Hawks and State Farm Arena, “As a community asset, we know how important it is for us to practice what we preach when it comes to being a good corporate citizen. While this is a great accomplishment, we believe this is just the beginning of a forever journey. We know fans, artistes and staff want to come to a venue that’s making a difference in the world and practicing sustainability at a high level.”

The Hawks and State Farm Arena continue to lead the way in sustainable practices for sports and live event venues. In January 2022, the State Farm Arena announced that it diverted more than one million pounds of waste from landfills.