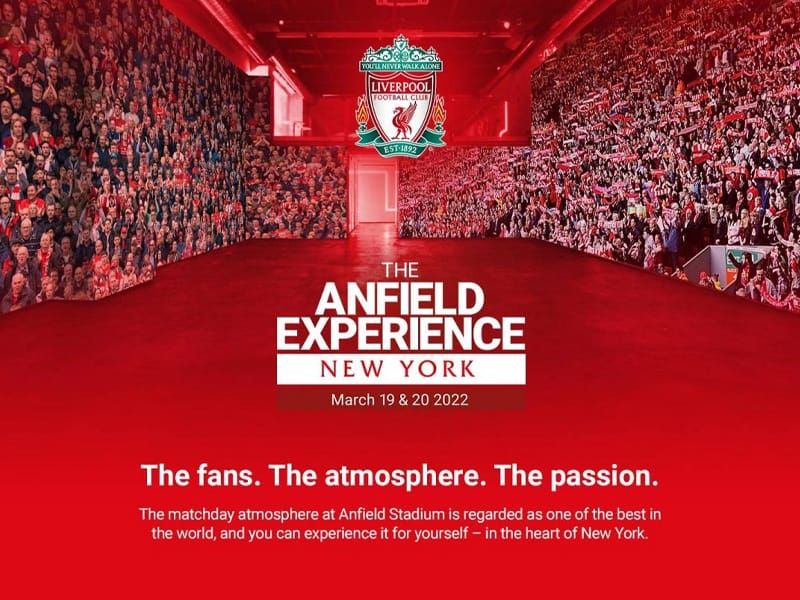 Thanks to the power of innovative technology, the Premier League team Liverpool F.C. (UK) fans can immerse themselves in the world-famous Anfield matchday experience from downtown New York (US).

The ‘Liverpool FC’ stated that a free two-day event in the Big Apple will see Liverpool F.C. harness the power of digital mapping to bring a truly unique virtual experience to supporters in the City, emulating what it’s like to be a part of the special Anfield atmosphere.

The Liverpool Football Club is a professional football club based in Liverpool, England (UK), which competes in the Premier League, the top tier of English football. Domestically, the club has won 19 League titles, seven FA Cups, a record nine League Cups, and 15 FA Community Shields.

The ‘Liverpool FC’ further stated that from March 19th to March 20th at Lightbox, 248 West 37th Street, fans will be transported to the iconic stadium in fewer than 60 seconds, through the use of dynamic 360-degree light mapping, innovative multiroom digital staging, immersive video technology and programable lighting -recreating the journey as it would be on matchday.

Fans will also get the chance to see what’s happening around the Liverpool City Centre, travel to Anfield and take in some of the sights and sounds around the ground, or walk around the exterior of the stadium and visit statues of the club’s greats, including Bob Paisley (English football Manager), or see the instantly recognizable The Shankly Gates (monument in Liverpool, England).

Plus, there’s the chance to discover what it feels like to walk down the players’ tunnel and touch the legendary ‘This is Anfield’ sign.

Fans will finish off their journey with an ‘awe-inspiring view from the famous Kop’ (Kop Stand at Anfield), where they will join in the singing and chanting alongside 54,000 fans on the screen.