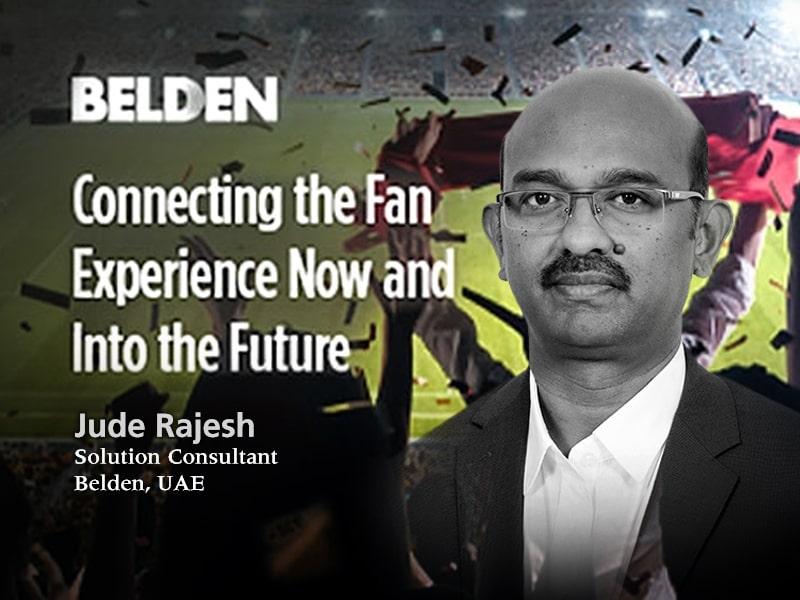 Jude Rajesh boasts sound technical knowledge and has more than 25 years of technical experience in designing IT connectivity solutions under his belt. Rajesh joined BELDEN MEA in 2012.

He supports BELDEN customers with design or peer review of IT connectivity solutions for most complex projects like airport, healthcare and modular data center.

Some of his recent peer review projects include stadia in Qatar for FIFA 2022 and the Coca-Cola Arena in Dubai, UAE.

Belden is one of the largest US-based manufacturers of high-speed electronic cables primarily used in industrial, enterprise and broadcast markets.

In an exclusive and meaningful exchange with ‘Coliseum’, Jude Rajesh, Solution Consultant, Belden, UAE, shed ‘light’ on how the Climate Pledge Arena in Seattle, Washington, US, which opened its doors not so long back, went on to become a net zero arena. He also pointed out how important it is for venues to reduce their carbon footprints going by the cataclysmic global warming effect which is just waiting to hit the planet in a big way.

The Coca-Cola Arena is a multipurpose arena located in the City Walk in Dubai in the United Arab Emirates. The venue opened on June 6th, 2019. It has a capacity of 17,000. Owned by Meraas and operated by ASM Global, the arena hosts events that include concerts, sport, family entertainment, and ceremonies.

Informed Jude Rajesh, “I worked in different industries such as in airport design and moved on to arenas, big stadiums such as the Coca-Cola Arena in Dubai. I have seen Coca-Cola Arena from a piece of paper – from architectural design to what it is today and enjoy the experience of working with multiple contracts, coordination issues, etc.”

Added Rajesh, “Belden’s forte lies in cabling. So, we are working from behind the screen and enable venue operators to deliver the best content and deliverables so that fans walk out of the stadium with smiling faces. If there is a problem in delivering the content, there is a problem with the infrastructure, and this is where Belden pitches in. We get involved with the venue project from the concept design stage till the project is delivered.”

The 17,459-capacity Climate Pledge Arena is a multipurpose arena in Seattle, Washington, United States. It is located North of Downtown Seattle in the 74-acre entertainment complex known as Seattle Center, the site of the 1962 World’s Fair, for which it was originally developed.

The Climate Pledge Arena is in Seattle and is similar to the Coca-Cola Arena with a capacity of almost 18,000. The arena first opened in the year 1962 and was recently renovated in 2018 by the American Global Advisory, Development and Investment Company for Sports and Live Entertainment industries – the Oak View Group (OVG).

Rajesh further elaborated about the arena, “When Amazon took the 1.2 billion dollars naming rights of the facility, instead of naming it as the Amazon Arena, they named it as the Climate Pledge Arena to communicate a message to everyone that the environment holds top priority and how each one of us can contribute, what is the Government level contributions, the developers or even a single user, each one of us have a commitment to this climate change happening all around and how to help mitigate the grave global warming impacts.”

Belden as a manufacturer played a key role in the Green initiative of the Climate Pledge Arena.

He talked about the three challenges involved in the project.

The Belden official pointed out, “The original design which the arena wore in 1962 became an iconic landmark of Seattle. So, the City Council made it clear in no uncertain terms that the original design of the arena could not be tampered with. Consultants and engineers found a way to work around. The challenge was that they have to still build an iconic arena without changing the existing roof. So, it was quite challenging. This has got nothing to do with Belden. It is more to do with engineers and architects and they found a solution to it.”

The Climate Pledge Arena project started in 2018 and finished in 2021. Right in the middle, when the project was moving ahead with full steam, COVID-19 spelt doom on the world in March 2020 with the United States bearing the major brunt -“All of a sudden there was huge manpower shortage and lockdowns.”

Asserted Rajesh, “And the greatest challenge was the logistics part. It was a nightmare.”

How Belden addressed the project challenge?

In 2016, Belden began conducting product lifecycle analyses as part of its commitment to measuring and reducing the environmental impact of its products. This data could be used not only to measure performance and track progress, but also to provide Climate Pledge Arena with the information it needed.

EPDs disclose the environmental performance of an individual product based on a lifecycle assessment (LCA), which examines raw material acquisition, manufacturing, marketing, distribution/shipping, use of the product, and product disposal.

To create its enterprise network infrastructure, the Climate Pledge Arena relied on Belden FiberExpress cable, Fusion Splice-On Connectors and Enterprise Closet X® (ECX) Patch Panels, as well as REV Connect® performance and reliability over mechanical splice connectors. Because no crimping, polishing or adhesives are required for termination, errors and installation time were reduced.

Rajesh pointed out, “The Climate Pledge Arena was high on the sustainability quotient and they wanted to be net zero. There is a difference between net zero and gross zero. So, what are the solutions and how we addressed them? The first challenge was the roof rider put forward by the City Council and it was all about the engineering part. They went 15 feet or five meter down, developed more space, more seats to accommodate 18,000 fans. The entire exercise was carried out as per the design and the challenge was addressed.”

He continued, “Now, the next part comes to manufacturers like us – how did we support them during the pandemic. Before that let me talk about product lifecycle data. What does that mean? Being a cabling company, can you imagine how many meters of cable the Coca-Cola Arena boasts? There is more than 165 kilometers of copper cable running around this building. There are more than 180 kilometers of fiber cables running around the Coca-Cola Arena. I am not even talking about the other cables like lighting control, BMS, IBMS. So, if you keep talking about thousands of kilometers of cable running around in this building, now the point here is how such a large content of material has been delivered into this building, how much we pollute while manufacturing these cables in someplace else.”

Talking about Environmental Product Declarations, he stated, “The developer is getting thousands of kilometers of cable manufactured in some other country. How much water is consumed, how much energy is consumed, how energy-efficient they are, what kind of a workflow, this is called lead design or Environmental Product Declarations (EPD) for every manufacturer. It applies to cabling, it applies to every material. This EPD program helped developers or the Oak View Group (OVG) to achieve additional points of meeting their sustainability goals while implementing the Climate Pledge Arena project.”

The pandemic was accompanied by the acute labor shortage problem – “We came up with a product which is easy to install and saves money. For instance, like I talked about thousands of kilometers of cable, there are so much of terminations to be done. A technician usually delivers 100 terminations a day. But with our cutting-edge technology, the same technician could deliver 200 terminations, and also saved on time. With our solutions, the work which is usually done by 10 people, can now be delivered with the help of five persons. When the COVID clobber had hit the world hard, there was huge manpower crisis, and the Belden solutions helped the Climate Pledge Arena operators to overcome the labor shortage problem. It helped them save both time and money.”

Stated Rajesh, “What is the first thing which comes to our minds when we talk about sustainability? Solar panel, windmill, maybe rainwater harvesting, what else? To reduce carbon footprints left behind by arenas, the entire people movement system should be streamlined. In the case of the Coca-Cola Arena, such an arrangement should be worked out that people can get down from the Metro and come straight to the venue. No transportation required means drastically reducing the carbon footprints. Such ideas are still in the conceptual stage and every other arena is thinking of implementing the same.”

For content to be delivered in a seamless manner in the arenas, there should be uninterrupted supply of power. The Wi-Fi facility in stadia requires ample amount of DC power. The 5G facility getting rolled out in most plush venues around the globe too requires sufficient and continued power supply – “How do you get optimum power to these devices so that one can save power? For instance, for security reasons, several cameras are installed in a building. Each camera is consuming 30 watts of power and if 1,000 cameras are installed, 30 kilowatt of power is being consumed. Even if one saves 10 percent of it, it comes to 10 kilowatt which translates to saving a huge amount of electricity.”

The above solutions offered by Belden helped the Climate Pledge Arena achieve its net zero goal. And Belden played a very strategic role in this net zero journey of the Arena – “And there was sufficient energy generated through renewable energy and water consumption.”

Rajesh concluded by stating that while getting involved in the Climate Pledge Arena project, the Belden employees learned two critical lessons:

The team at Belden deserves a huge pat on their backs for playing a crucial role in Climate Pledge Arena’s successful implementation of net zero. The company has proved that they are indeed responsible towards the environment and can aptly be termed the ‘Green Guardians’.