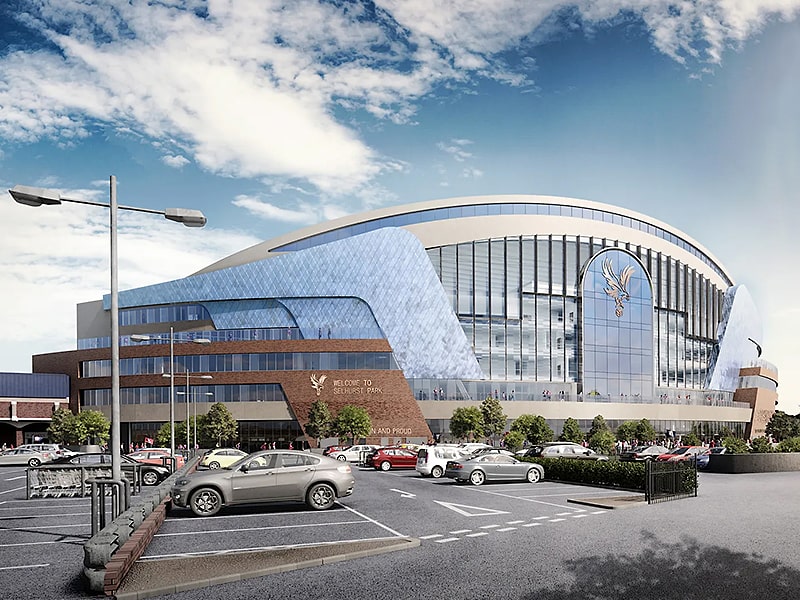 The Premier League team Crystal Palace Football Club’s updated planning application for a new main stand at their digs – the Selhurst Park Stadium in London, England (UK) – has been approved by the Croydon Councilors, paving the way for a transformation of the stadium.

‘Crystal Palace F.C.’ stated that Croydon’s planning committee first gave the application the green light four years ago, but it was delayed by the COVID-19 pandemic and the club recently submitted minor adjustments to the scheme to adhere to the New London Plan (NLP) requirements.

The Crystal Palace Football Club is a professional football club based in Selhurst in the Borough of Croydon, South London, England (UK), who competes in the Premier League, the highest level of English football.

The 25,456-capacity Selhurst Park Stadium is a football stadium in Selhurst in the London Borough of Croydon which is the home ground of the Premier League side Crystal Palace F.C. The stadium was designed by Archibald Leitch and opened in 1924.

The New London Plan (NLP) that came into force on March 2nd, 2021 is the latest spatial development strategy that must legally be taken into account when planning decisions are made in the Greater London Area.

‘Crystal Palace F.C.’ further stated that this required fresh approval before planning permission could be granted and any work could begin, together with the signing of Section 106 agreements and approval from the Mayor’s Office.

The main stand development will overhaul Selhurst Park, which has been the club’s home since 1924, transforming the matchday experience and providing new year-round community facilities.

Inspired by the club’s heritage, the design pays homage to the original Crystal Palace on Sydenham Hill and will increase capacity from 26,000 to more than 34,000.

None of the changes to the planning application will alter the size or scale of the scheme.

Once planning permission is formally approved, the club will be able to agree to plans for the acquisition of six houses in Wooderson Close and the relocation of residents, and to conclude ongoing discussions with Sainsbury’s to acquire a piece of land required for the development.

Stated Steve Parish, Crystal Palace Chairman, “I would like to thank the Croydon Council for their continued support for the stadium redevelopment which will bring substantial investment into the borough, as well as breathing new life into Selhurst Park. We would have liked to have started the project sooner, but our plans were delayed by financial constraints caused by the pandemic. In the last couple of years, our focus has been on bringing our exciting Academy development to fruition, but our attention will now turn to the stadium project.”

Added Parish, “It has long been our ambition to extend and modernize Selhurst Park, making it a home fit for the 21st century. We are looking forward to getting started on the project. There is a lot of preparatory work to be done in the coming months and we will update on a likely timetable in due course.”