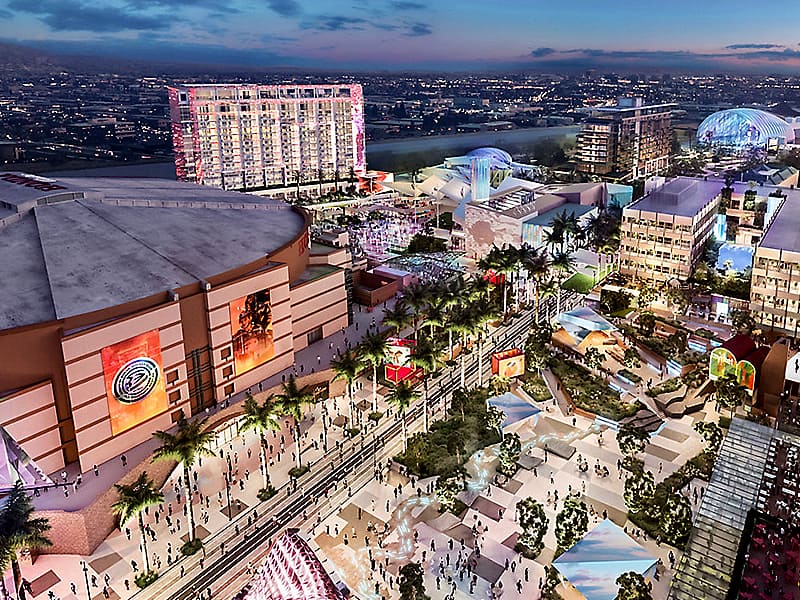 While the Major League Baseball (MLB) team Los Angeles Angels stadium and development are in limbo, the Anaheim Ducks’ ocV!BE mixed-use project around the Honda Center in Anaheim, California (US), is in its final stages of approval.

‘Spectrum News 1’ stated that recently, the majority of the Anaheim Planning Commission voted 5-0 to approve the owner of the Anaheim Ducks, the Samueli family’s proposed $4 billion mixed-use project and entertainment district on a 115-acre lot surrounding the Honda Center and the Anaheim Regional Transportation Intermodal Center, or ARTIC for short. Two planning commissioners were out.

The Los Angeles Angels are an American professional baseball team based in the Los Angeles metropolitan area (US). The Angels compete in Major League Baseball (MLB) as a member club of the American League West division. Since 1966, the team has played its home games at the Angel Stadium in Anaheim, California.

The 45,050-capacity Angel Stadium of Anaheim, originally known as the Anaheim Stadium, later the Edison International Field of Anaheim, and commonly referred to as just Angel Stadium, is a baseball stadium located in Anaheim, California.

The Anaheim Ducks are a professional ice hockey team based in Anaheim, California. The Ducks compete in the Western Conference of the National Hockey League (NHL) as a member of the Pacific Division, and play their home games at the Honda Center.

The 18,336-capacity Honda Center (formerly known as the Arrowhead Pond of Anaheim) is an indoor arena located in Anaheim, California (US). The arena is home to the Anaheim Ducks of the National Hockey League (NHL).

ocV!BE, the premier mixed-use community and live entertainment district, is coming to Anaheim in 2024.

This $4 billion, 95-acre, mixed-use community will surround its anchor, Honda Center, with new live entertainment venues, dining and retail offerings, and public amenities. ocV!BE will provide a full range of entertainment and dining, activating the district daily for the enjoyment of its guests, onsite employees and residents.

ocV!BE is an endeavor of the Samueli Family, the owner of the Anaheim Ducks and the longtime Manager of Honda Center.

ocV!BE will attend Coliseum Summit US which is around the corner – September 28th-29th, 2022, at the Dignity Health Sports Park in Los Angeles.

Opined Lucille Kring, an Anaheim Planning Commissioner and former longtime City Council member, “This is a project that’s the biggest that’s come around since I’ve been involved in Anaheim – and that’s a long time -and the fact that they are doing it with their own dime is a tribute to what they think Anaheim will offer. They’ve invested in the Ducks, and now they are investing in ocV!BE and the Platinum Triangle. They are investing constantly in Anaheim, and that’s a wonderful thing.”

‘Spectrum News 1’ further stated that the project will now go to the Anaheim City Council for final approval. The Council plans to vote on the project in September.

The proposed multibillion dollar project comes four years after the City and Henry and Susan Samueli’s Anaheim Arena Management agreed to extend the management operations of the City-owned Honda Center and take over ARTIC until at least 2048.

The Samuelis had operated the Honda Center when it was then known as the Arrowhead Pond since 2003, before buying the Ducks in 2005.

In 2020, with control of most of the area, the Samuelis announced the ocV!BE project in the City’s growing Platinum Triangle area.

A former industrial area, the 820-acre Platinum Triangle is anchored by the Honda Center and Angel Stadium. It’s the City’s vision of a downtown stadium district with shops, dining, offices, and homes.

The Angels owner had proposed building around Angel Stadium until the stadium land deal fell apart due to controversy.

The plan calls for 1,500 apartments, with 195 reserved for low-and-moderate income households. More affordable housing could be within a quarter mile of the development.

The project also calls for a $390 million update of the Honda Center arena and $60 million to the ARTIC transportation center.

The Samuelis said they are funding the entire project with no City subsidies or rebates.

Noted Brian Myers, a spokesperson for the Samuelis, “OcV!BE represents the dream of the Samueli family. The dream is not just an incredibly designed and engineered transit-oriented masterplan community where the residents of Anaheim and surrounding regions can live, work and play. Yes, it’s that, but not just that. The dream of the Samuelis is to create a thriving community that is inclusive to everyone, sustainable at every level, and a community where the sense of purpose transcends its sense of place.”