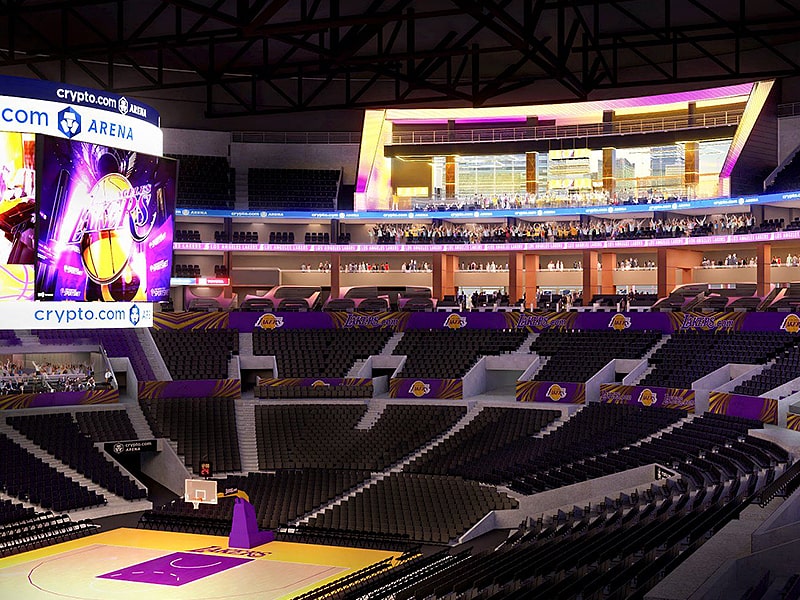 There is a new mantra at Crypto.com Arena in Los Angeles, California (US) that has nothing to do with basketball or hockey or rock concerts. The three words appear on small, white signs posted throughout the building -‘Pardon Our Dust’.

Lee Zeidman – President, Crypto.com Arena, US, will be one of the key-note Speakers at the Coliseum Summit US to be held at the Dignity Health Sports Park, Los Angeles, on September 28th-29th, 2022.

‘Los Angeles Times’ stated that the 23-year-old sports venue, previously known as the Staples Center, has launched a multimillion-dollar campaign to rejuvenate itself during the offseason, with construction underway at every level. In a place this big, there is enough work to last the next three Summers.

Los Angeles (US)-based the Anschutz Entertainment Group, also known as AEG Worldwide, is an American global sporting and music entertainment presenter and a subsidiary of The Anschutz Corporation. It is the world’s largest owner of sports teams and sports events.

At Crypto.com, that means eliminating the street between the arena and L.A. Live to create a tree-lined public plaza with music and big-tent attractions. It means adding a glass-walled club so that patrons can watch players file out of the locker room.

More significantly, crews will blast out the upper seats at one end, creating an indoor/outdoor space where fans can mingle on a terrace overlooking downtown, then stroll inside the bowl to peer down on the court.

All of this becomes essential in Los Angeles, where the new 70,000-capacity SoFi Stadium, a renovated 78,467-capacity Los Angeles Memorial Coliseum and the 18,000-capacity Intuit Dome, the future home of the Los Angeles Clippers of the National Basketball Association (NBA), will compete for discretionary sports dollars.

No longer the new kid in town, Crypto.com Arena, “has to keep up with the Joneses’, said Michael Veley, founder of the Sport Management Program at Syracuse University in New York (US).

Added Veley, “In that market, you are going up against some pretty heavy hitters.”

It was about a year ago that the downtown venue faced a turning point. With the Clippers announcing plans to leave for Inglewood, AEG needed to keep its other marquee tenant, the NBA team Los Angeles Lakers. Ownership signed the team to a 20-year lease extension, vowing to spend “nine figures” on capital improvements.

Beckerman said at the time, “In a lot of ways, the Lakers put the arena on the map. Their success had such an impact on our success.”

The promised construction began in May, while the Los Angeles Sparks of the Women’s National Basketball Association (WNBA) still were playing, and will continue until the Lakers, Clippers and Los Angeles Kings of the National Hockey League (NHL) return in the Fall.

The hefty price tag – ownership will not disclose the actual cost – also coincides with continued volatility in the cryptocurrency market. But Beckerman said AEG has “all the faith and confidence in the world” regarding the arena’s title sponsor, which pays AEG $35 million a year for the naming rights.

Additions during this first Summer will include two 65-foot videoboards at the South end of the building, bracketing the retired Laker jerseys and more LED ribbons to make for a total of three full rings. The bowl will get new lighting, concession menus will be updated and there will be two cashierless markets where customers can grab a sandwich and a beer, their purchase registered by sensors as they walk out.

Said Lee Zeidman, Arena President, “Our job is to make it easy for fans. It’s all about efficiency.”

Given the steadily rising cost of attending professional sports, it should be no surprise that many of the planned upgrades focus on premium-seat and season-ticket holders.

Workers are redesigning the Impact Sports Bar and Grill beside the main plaza and the private Chairman’s Club downstairs. The suite-level concourse is getting new paint, carpeting, frosted-glass doors, and sleek-looking restrooms.

Two things will make renovations easier. First, AEG convinced two of the three original architects, Dan Meis and Ron Turner, to reunite on the project though they now work for competing firms. Second, the original design left room for improvements.

From the start, in 1999, the layout had to be spacious enough to accommodate four teams and a full schedule of concerts. Crews needed to enter from one end and exit from the other as they performed quick changeovers, switching from basketball courts to rock stages, from hardwood to ice. There had to be lots of storage.

Two decades later, the concourses are still wide enough to satisfy evolving industry standards and the Clippers’ departure in 2024 will create even more room for expanding and adding features.

Added Beckerman, “So often, things you want to do, you can’t do because you’re constrained by space. We’re blessed that we have such a significant footprint.”

During the second phase of renovations next Summer, work will begin on a two-story ‘Tunnel Club’ where, by the third year, stairs will lead down to the floor level. This lower bar will have tables along the glass wall where patrons can sit only a few feet from where players go by.

In another move to increase the arena’s buzz, several hundred premier seats at the corners of the bowl will be replaced by a new kind of luxury suite that will have walls but no ceiling, leaving them wide open to the stands.

Depending on City permits, construction on the outdoor plaza also might begin in 2023, providing the Figueroa Corridor with a new public gathering place.

Beckerman further stated, “It’s not just for ticket-holders. It’s a communal experience when people want to come here during a Kings playoff game and they’re in the middle of everything.”

Other venues around the country have taken a similar approach, eschewing a sea of parking lots to surround themselves instead with pedestrian malls, retail shops and restaurants. This trend might foster a sense of community, but it comes at a price.

Observed Scott Minto, Director of Sports MBA Program at the San Diego State University in San Diego, California, “Gone are the days when you can park your car and fire up the barbecue. Now you’re surrounded by restaurants and bars … it’s becoming more expensive.”

Fans in the least-pricey seats will receive their biggest perk during the third Summer of renovations with the expansion of the City View Terrace. At present, the patio offers a view of the Los Angeles skyline but is separated from the action.

When exterior walls come down and seats are removed, the new indoor-outdoor space will connect with the bowl, giving people a chance to eat, drink and mill about while watching the game below.

Added Minto, “Younger people who attend sporting events want some kind of interactivity with their peers and the people around them. They’re not interested in just sitting in one place.”

So far, industry experts say, AEG has done a good job of keeping its arena current. Now comes the challenge of staying that way for another two decades.

Minto concluded by stating, “The shelf life can be pretty substantial. If you can keep changing with the times, keep investing into it, it can last for a very long time.”